...and we liked the concept. A lot. DWS first mentioned the Magical Bakery on his website. His concept goes like this: A baker makes a pie, carves it into slices, and sells each slice of the pie until it's gone. For a writer, his/her words are the pie and the writer's stories make each slice of that pie. But the writer's bakery is a magical one, in that s/he can sell the same slice of pie over and over again. For instance, DWS ("the Deanster" to those who know him ) sold a short story to an anthology...then sold the same story to ANOTHER anthology...then sold a hold on the story to a Hollywood media outfit...and has the story to sell again and again, via Kindle or Smashwords or iBooks...and on and on.

What's the matter with the slice of pie (above), anyway? Is it BLEEDING?

Inspired by DWS, we're opening our own M. Bakery. And, absolutely, this is the place where we hype our own stuff and hope that someone, someday, buys something. Not for the money -- this is the day-old Magical Bakery, where we discount goods whenever we can -- but because we want people to read our stories.

And the name of our bakery? 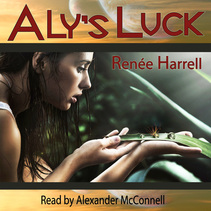 ...but you can hear the amazing Alexander McConnell bring Aly's Luck to audio life at Audible.com or through iTunes. It won't be a quick listen -- the audio book runs just under 10 hours -- but we hated to hear it end. Alexander does an incredible job, voicing almost one hundred characters and giving them distinctive personalities.

We knew he was good when we selected him. We didn't know he was this good.

The last time we checked, Audible was asking $19.99 for the unabridged rendition. iTunes, through some sort of Apple wizardly, was only charging $4.99. Same ten hours of science fiction adventure, same terrific narrator.

Something seems a little fishy here.

...unless you want a not-very-bright, flesh-eating, kind of incompetent monster to work the case. And, if that's what you want, score!, have we got a detective for you.

Like most works of fiction, Frankenstein, P.I. started with What If? In this case, we wondered, “What if Frankenstein’s monster decided to become a private detective?” We're not talking about Mary Shelley’s creation, not at all. Her version of the monster is intelligent, caring, and well-spoken. We wanted a growling, brain dead, green-skinned creature of the night who, for some reason, fancied himself as Magnum, P.I.

Since Frankie lacks “a single functioning brain cell” and grunts instead of talks, we gave him a female sidekick. Friday is gorgeous and corrupt, views Charlie’s Angels as her personal televised guidebook on crime-solving, and values beauty more than a bit too much. She’s smarter than her boss, but barely, and respects his detecting skills. Unfortunately, he doesn't have any detecting ability.

Our heroes share a building with the world’s most fantastic detective (sorry: the World’s Most Fantastic Detective™). We added in some conflict between the investigators, threw in a series of murders, mixed well, and had a wonderful time. We hope you'll like it, too.

Our best-reviewed novel ever?

Cassandra Parkin, 2011 Scott Prize winner, said this about the book: "In the small, insular town of Ashfork, Kristin Faraday lives an isolated and penniless life with her single mother Becky – an adorable but feckless artist, who Kristin seems to end up parenting quite a lot of the time. Her adolescence has been difficult and lonely. Apart from two close friends, she feels disconnected from the rest of her peer-group, and longs to escape. Then, a group of oddly-assorted people arranged into a loose approximation of family move into town, and Kristin realises there is something sinister about them…

If you’re thinking these ingredients sound familiar, well, you’re probably not wrong. This is described by its authors (Renee Harrell being the nom du plume of a well-established writing partnership) as being “a supernatural thriller, posing as a Young Adult paranormal novel, written for a crossover audience”. The YA crossover genre is probably best known for the love-it-hate-it-please-God-make-it-stop trainwreck that was the Twilight saga, and every element I’ve mentioned above appears in Meyer’s books. Here’s why 'The Atheist’s Daughter' is orders of magnitude better." (For the rest of the review, stop by here.)

Jennifer, at Can't Put It Down, said, "Having just finished this novel, I immediately took it upstairs to my 13 year old stepdaughter and said, "You HAVE to read this!" She gave me a quizzical look and I said, "Yes, it is THAT good!"

You want to see some bad reviews? Just go to TerribleReviewsPlusWe'reSoMean.com for the full scoop.

Our only short story set? Since you've asked...

...it's After Things Went Bad: Three Tales of the Near Future.

If you've got a buck to spare, you'll find the dig version over at Smashwords right here. If you're a Kindle kind of person, you'll find it here.

At 99-cents, it's a bargain, we tells ya. But you don't only have to take our word for it. Here's what Sarah Nicolas, of Sift Book Reviews said (in a 5-starred review): "Even more than the distinctive voices, impeccable writing, and well-wrought characters, the dark captivating atmosphere will wrap around you and linger long after you finish reading." 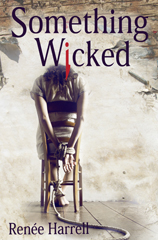 ...Something Wicked. In hindsight, we realize we shouldn't have selected a title that's been used repeatedly by other writers. Go to Amazon, f'rinstance, and you'll find forty-some books with the name. We should have called it something like, The Girl Detective Versus Evil Bad Possibly Undead Guys.

SW is our take on Nancy Drew. It's a Young Adult thriller with a touch of the paranormal and a little romance.

Kim and Alanna? These women know their stuff.

The whole reading thing is so last year... 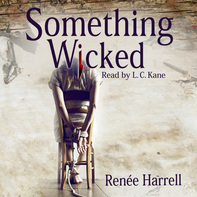 ...but you're in luck 'cause the amazing L.C. Kane had done the reading for you. Available at Audible.com and iTunes. Six-plus hours of listening fun and the storyline goes like this:

What if a man loved so deeply and so selfishly, he was willing to do whatever it took - including murder - to reincarnate his lost lover? And what would happen if he thought his true love had returned to this earth, without any knowledge of who she truly was? What would happen next? High school student Ann Lippens is about to find out...

Cody said, "You were innocent when I met you. Innocent when I lost you. You're innocent now.
"I'm not exactly innocent."
"You're pure."
Pure? Ann thought. What's that supposed to mean? I'm a virgin?
Then she thought, What if I wasn't?