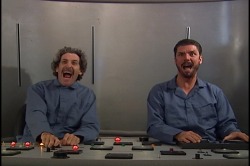 A few years ago, my brother, Mark, bought a high quality video camera. He's a practical dreamer (has his dreams but pays his bills) and he decided to shoot a movie for theatrical release. There were two problems with that: (1) It costs a lot to shoot a movie for theatrical release and Mark didn't have that kind of money; and (2) he had a fine camera but it wasn't a movie camera. It was a top-of-the-line hi-def camera. Even if he managed to film a cinematic wonder, nobody was going to distribute the thing.

So he gave us a call, we discussed things, and we came up with a new idea. Instead of filming a movie, we'd shoot a movie trailer.

The likelihood of this somehow working out? We thought, maybe one in a thousand. (This was an optimistic forecast.) But then we made an enormously stupid decision. We decide to write the movie trailer without having written the screenplay.

We realized that this move was either genius or stupid as hell. (If you're a genius, you already know how things worked out.) Our resources were limited, the equipment was new, our funds were nonexistent, and we were using friends and local actors as stars of the trailer that we hoped to shoot. There was a good chance that we'd end up with NO usable footage. We decided to make the trailer, anyway. We thought that we might at least shoot a trailer that we'd like to see.

And that's what we did. Pulling in friends and family, asking for favors, finding props, we made a trailer. When we discovered that sound and lighting problems had ruined a big chunk of the footage, we got together a year later and did it all over again. Finally, finally, we had enough footage to put together three minutes of film.

By then, Mark has taught Harrell how to edit footage. Because Mark is an opinionated man -- and because his brother can be just as stubborn as he is -- the two of them then spent the next four years cutting and recutting and REcutting the footage. Changing the storyline, adding new bits, dropping old favorites. There was really no excuse for that kind of delay but there you go.

Because we love you guys, we're posting the trailer directly below these comments. (Because we're techno-ignorant, it may not work on your screen. If not, go to YouTube and see it here.)  Kids, we're telling you, don't want to try this at home.

Yeah, our very first book trailer. Probably our very last book trailer, too.
See, neither one of us thinks that book trailers make much sense. Oh, they're kinda fun, it's a kick to see a trailer for your very own book, but do they work? Essentially, do people see book trailers and decide, at that moment, they need to buy the book?

There are good trailers (we like this one), there are bad ones (too many to count) and we've never, ever, bought a book because of its trailer. Over on Absolute Write, various writers are debating the subject -- right here -- and the feeling seems to be, while the occasional trailer sells the occasional book, a bad book trailer actually kills any potential interest in a novel.

We decided we'd, maybe, like a book trailer but we didn't have an interest in making it ourselves. Price shopping, we discovered that the pros at CreateSpace will make a 30-second, text only, trailer for the low, low price of $1,199.00. We like CreateSpace, we have two of our novels available through CreateSpace, and we laughed like crazy when we saw how much they were charging for their product.

So we did what we often do when we think things are ridiculous. We got even more ridiculous-er. We went to fiverr.com and tried to find someone who would make us a 30-second trailer, text only, trailer for a tiny amount of cash. And we got lucky. Rey from Virtual Solution said he could provide the very thing for five bucks...with some pretty severe limitations.

We'd have to use an existing template, one that Rey has provided to other fiverr fans. The music, the images, these were pretty much all the same from one project to the next. While we'd be able to provide six lines of text, each line of text could be no longer than three words. So, if we hoped to be startlingly original, if we hoped to sell multiple copies of book from this trailer, we were pretty much out of luck.

On the other hand: $5. How could we not? Rey said the HD version (yep, he sent us two version for our fiver) would load faster if we slapped it on YouTube first so there you go. We hope you like it. If you don't...five bucks!