Something Evil: Our next project 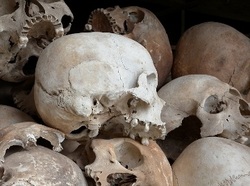 Once upon a time, our next project was going to be a sequel to The Atheist's Daughter, called The Preacher's Son. We did a rough outline (our outlines are always rough), beginning to end, then wrote the first half of the first chapter. The second half of the first chapter decided to be much less cooperative, going in all kinds of bizarre directions and pleasing neither of us, so we've shelved those pages...for now.

We moved over to Syr's World, a sequel to Aly's Luck, drafted a rough layout, beginning to end, before writing the first chapter. We ramped up our promotional efforts for Luck then, not completely pleased with how the sequel had started, we wrote the first chapter again. A little less Dobbins-centric, a little more Aly-ish. Right about then, we discovered our most recent promotional efforts for Aly's Luck hadn't done much to move the readership numbers so we've shelved those pages...for now. Also, we want to write a completely different Chapter One. Focusing on we-don't-know-what.

Meanwhile, narrator LC Kane did such a wonderful job narrating the audio book for Something Wicked that we became excited about that novel all over again. We did an outline, beginning to end, and wrote the first chapter. We unexpectedly enjoyed the first chapter so much, we went ahead and wrote the second chapter. (Weirdly enough, we like that chapter, too.) Right about then, we noticed that Wicked was showing signs of life, with a growing number of positive reviews.

If you somehow skimmed over the headline above, you can expect Something Evil to be our next project. Ann Lippens is older and a little battle scarred. She's moved out of her childhood home, is entering college -- and has just met the gorgeous and possibly evil Gabriel Brogan....